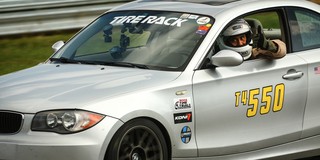 The 2020 Tire Rack Time Trials National Tour Powered by Hagerty finale is quickly approaching, November 7 -8, and this event at Michelin Raceway Road Atlanta is going to have a unique look to it.

This year’s event is run in conjunction with the Atlanta Region’s American Road Race of Champions (you may have heard it referred to as the ARRC – think “ark”).

Because the Road Atlanta Time Trials National Tour event is sharing the track with the road racers, there’s even more happening. Luckily, the Time Trials portion will feel very familiar – and at full capacity (with a very short waitlist should you still be on the fence about coming,) the only thing you may notice is that some of those pesky other run groups are passing in the corners without point-bys (they’re allowed – it’s racing)!

So What’s Happening At The Time Trials Event?

In the schedule, the Time Trials program holds distinct blocks during the weekend. Each of the three Time Trials groups will run 20-minute practice sessions back to back to back at 12:50 p.m. on Friday, just before the first set of ARRC sprint races.

The KONI Podium celebration will be determined by two scores – the quickest individual lap in each of two Time Attack groupings.

Those groupings are divided into two sessions – so a bad session doesn’t sink the entire ship. Time Attack 1 includes a 15-minute session at 4:15 p.m. Saturday and a 25-minute session for each group Sunday morning prior to Road Atlanta’s two-hour church window.

Time Attack 2 comes after the ARRC Endurance Race. Time Attack 2, Session 1 gets started at 1:50 p.m. for each experience group. Don’t forget how good that fast lap felt, however, because Session 2 immediately follows, with drivers expecting about 45 minutes of downtime between their sessions.

The weekend is capped by the KONI Podium Celebration at approximately 4:45 p.m.

Road Atlanta is a 2.54-mile professional-level circuit that rewards perfect placement through corners and can also stretch your car to speeds quicker that you’ve ever seen down the long back straight.

Currently, the circuit is best known for the annual IMSA Petit LeMans 10-hour race, but has a long SCCA history. The Atlanta Region SCCA and Road Atlanta have grown and supported each other through difficult times, and the track hosted the SCCA National Championships – which we now call the Runoffs – from 1970 to 1993.

The track switched hands from holdings of Dr. Don Panoz to the France family a few years ago, who continue to upgrade the facilities year after year. It is truly one of the premier road racing tracks in the United States.

Tell Me More About The ARRC, Please

The American Road Race of Champions was the name of the SCCA National Championship road racing event beginning in 1964. As tends to happen in motorsports, some money changed hands and it became the Champion Spark Plug Road Racing Classic in 1973. Longtime friends Valvoline came on board in 1985, and in 1987 the word “Runoffs” makes its first appearance.

This may surprise you, but just because the SCCA declared the event title “The Runoffs” does not mean that people automatically began calling it that right away. Naturally, the ARRC name hung around informally, all the way to when the Runoffs moved to Mid-Ohio in 1994.

With the name free and the event gone, the Atlanta Region reattached the name to an annual Regional event. Originally, it was the defacto National Championship for classes not invited to the Runoffs, and has evolved through the years. The prestige of the ARRC remains, however, and many drivers make an annual trek to the event each year.

This year features a series of 20-minute sprint races, and a Sunday afternoon endurance race, for SCCA road racers. Interested in road racing? There’s an entire source of reference materials there for you to talk to!

Wait – What Was That About A Church Window?

Road Atlanta has a history of being good neighbors, and this is even more true as the Atlanta Metro area continues to creep north. Every Sunday, from 10 a.m. to noon, Road Atlanta enforces “quiet hours”. This is where the “lunch break” traditionally falls on the schedule. If you have a true “race car engine”, you will not be allowed to rev it during this time.

Road Atlanta Has a History of Being Good Neighbors?

Most definitely! In fact, in the 1970s, they worked hard to draw as little attention to themselves as possible. Actually, this is probably best to Google, rather than hear from us.

The problem with a popular event like this is that it sold out quickly. If you’d like to follow along at home, hop on over to TimeTrials.SCCA.com for live timing and more to keep up with what’s happening.