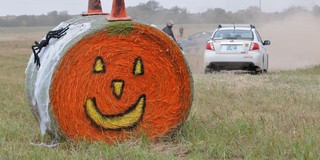 The 2020 DirtFish SCCA Rallycross National Tour drew a diverse field of drivers from seven different states this past weekend to Billy Bob’s RallyCross Farm in Billings, Oklahoma. This challenge awarded all participants a relaxed ending to the weekend. The event started on Friday with a social reception consisting of 10 cases of ice-cold craft beer sponsored by Elk Valley Brewery with homemade chili and assorted snacks prepared by Beth Sharp and friends. The bonfire was cancelled due to high wind combined with a high fire danger, but the hospitality continued Saturday morning with cinnamon rolls, biscuits and gravy, and high-octane coffee.

The Saturday morning course designed by Robert Seelig looked like an “M” with high speed flowing offset slaloms. Racers enjoyed an extra-long 2 hour lunch of pulled pork and baloney (after all it was baloney day.) Saturday afternoon’s course was a variation of the morning course, run in the reverse direction. Social activities continued that evening with soft drinks, craft beer and bench racing. Door prizes were sponsored by Bob Howard Honda. Sunday’s course, named “Perimeter Road,” was designed by Jim Rowland. As the name implies, it utilized the area around Seelig’s Saturday courses.

Stock AWD was the battle of the Oklahoma boys as Donald Carl, from Bixby, battled it out with Austin Schaffer, from Lawton. It was looking as if Carl was going to walk away with the class’ only trophy, but on the his third run on Saturday afternoon’s course, he hit two cones opening up the door for Schaffer. But Carl knocked out clean and fast runs to finish out the event taking the win.

Stock FWD was dominated by multi-time SCCA RallyCross National Champion Jan Gerber from Ralston, NE, driving his 2011 Mazdaspeed 3. Collin Oelkers from Dalhart, TX, a National Champion in his own right, fought hard with his 1993 Subaru Impreza, but settled for second after a series of cones while Gerber remained clean through all ten runs.

Stock RWD was dominated Mark Macoubrie of Louisburg, KS, who hands down had the prettiest race car, a 1999 Porsche 911 Carrera C2.  Mark gave the Billings spectators a great show of the Porsche’s handling around the showcase turns hanging out the rear of the 911 as he took the top spot in the single-car class.

The Prepared AWD leader after the first two runs was Lakewood, Colorado’s Eric Schaub in his 2000 Subaru Impreza 2.5 RS. Mark Hill of Lawrence, Kansas, multi-time National Champion and past TripleCross winner, had cone trouble in the technical sections of the Saturday morning and afternoon courses. It looked like he might be not able to achieve a 2020 TripleCross, but on Sunday morning, Hill put on an impressive driving show, demonstrating how torque vectoring technology works by putting some impressive cone free 39 second times on the clock. This comeback gave Hill the third and final requirement for his second TripleCross victory.

Prepared FWD was loaded with three past SCCA National Champions. Christian Retterer drove from Hampton, GA with his 2001 Acura Integra GSR, making Oklahoma local and event course designer Bob Seelig work for TripleCross honors. After the first two runs it looked like Retterer was going to succeed, but a cone on his third run was exactly what Seelig needed to catch up. During the lunch break it was overhead the tire discussion that Retterer was running new IndySport SGs while Seelig was running 8-year-old DMACK gravel tires. The IndySport were faster out of the box but the hard pack surface was causing excessive tire wear. When the dust settled, Retterer hit three cones while Seelig remained clean all weekend, making the difference in the results as Seelig took the class win and his first TripleCross trophy.

Modified AWD had the most entries of the weekend with five drivers, in nothing but Subarus. Michael Tritt eeked out the class win with a 0.028-second margin over Jeff Maize in the second trophy position.  Maize was quoted as saying, “I would have won the boloney challenge if we would not have had so many cones.”

In closing, a special thank you to all the people who made this National Tour possible. NEOKLA region who drove the equipment over 100 miles each way and to Mr. and Mrs. Seelig who are rumored to have put more than 100 hours in site preparation. This National Tour is a great example of the efforts of all to emphasis of social activities while remaining COVID-19 safe.

Full galleries of Jim Rowland’s photos can be found here.